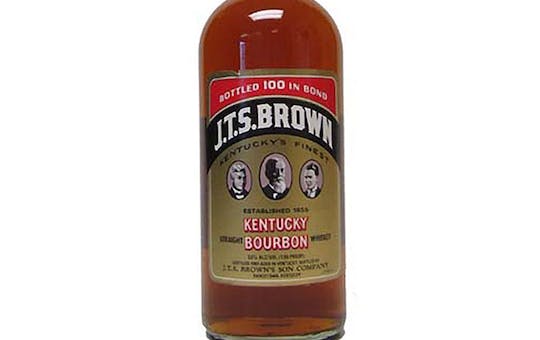 J. T. S. Brown is a 100 proof Kentucky bourbon whiskey produced by the Heaven Hill Distillery company. The J.T.S. Brown label dates back to 1855. The distilling operation is in Louisville, Kentucky, and aging and bottling operations are in Bardstown, Kentucky.

J.T.S Brown Bourbon is a 100% proof, Bottled in Bond Kentucky Straight Bourbon Whiskey that has been produced since 1855 and is currently owned by the Sazerac Company.

This whiskey was named after James Thompson Smith Brown who was a Master...

A new arrival to Martin Bruni Liquor is Solar Spirits a Sustainably produced line of Spirits that is unique not only with the process but also the use of Cranberries as a base.

Solar Spirits was founded and started in 2016 to be an environmentally friendly Craft Distillery in the Tri-Cities that fused artisan methods with technology, calling it “Craft-tech”. The system uses thermal oil to heat water for beer mashing, cleaning, and still operation.

Their slogan of Solar Spirits is "save the world...

Oakshire Brewing out of Eugene, Oregon is a small batch brewing company founded in 2006.

A highly recommend beer of theirs is the Overcast Espresso Stout an American Stout giving the dark and silky stout with a shot of espresso which comes from Wandering Goat Coffee. The secret to their coffee is it is cold-brewing it - 13 to 16 hour steep extracts the coffee flavors you want in a beer. This beer is available year round. We like it for the perfect day to watch the waves rollin on a cold windy day...

Can Northwest fruit cure a hangover? A writer knocks 'em back to find out... for the good of humanity, of course

Chris Joseph had a problem. His girlfriend liked to drink fruit-infused vodkas, but they always left her feeling bad the next day. He also had a friend who was selling berries at the farmers market and was constantly trying to figure out what to do with the leftover fruit.

Joseph decided to buy some high quality vodka and use the extr...

Keep your Cook’s California Champagne chilled at about 42 - 45°F.

Pre-chill your glasses until you are ready to enjoy your delicious Cook’s cocktail.

Don’t bubble over – when adding Cook’s California Champagne, pour only small amounts at a time to prevent foam-over.

Repeat until your glass is filled.

POP ETIQUETTE: HOW TO SERVE SPARKLY

Whether it’s for a big party or to celebrate one of life’s little victories, here’s how to serve Cook’s with confidence.

HOW MANY SERVINGS ARE I...

In Cocktails by Chrissy MartinSeptember 23, 2016

We all feel it; those last few sad moments when you are about to finish that bottle of bourbon or whiskey. It’s always so hard to say goodbye to that delicious water of life! Especially when it could be a bottle that you really enjoy and may not be able to get your hands on for a while.

So what do you do with your empty bottles? Do you trash them, recycle them or re-use them? For me, it will depend on the bott...

The former state liquor store in Ocean Shores liquor store has been auctioned a third time and the final bid was $200,000 less than a previous winning bid.

The Ocean Shores store was one of six stores that had to be re-auctioned by the Washington State Liquor Control Board, which has been selling off the rights to retail liquor licenses under the...